Jeff Raye and other uncanny tales

I love comic books, especially Golden Age. Back when I was a kid I couldn’t get enough of those square-bound comics printed on cheap paper with their extraordinary cover art and wonderful short stories, everything from sci-fi to mystery, crime, horror and the, well, just plain weird.  And they all featured the fashions, language and motor cars of the forties and fifties. Nearly all my meagre pocket money went on getting those wonderful stories – and they were worth every precious penny.
Actually, for a long time I thought those comics had come hot off the presses in America and didn’t realise that many were pre-code and been out of print for years. In fact, an English guy called Alan Class had bought the rights and given them a new lease of life, importing them to Britain for eager kids like me. I don’t know why but I just didn’t get a kick out of Captain Marvel and
more famous superhero type stuff. No, it was Alan’s other stories that I went for. Maybe it was the thrill, the shock of the explicit pre-code material that grabbed me; the sheer diversity of all that bloody noir crime, fantasy, shock-horror, sci-fi and the speculative. I mean, even now the hairs on the back of my neck start to rise when I see Jeff Raye, scientist, trapped between two worlds! (horrified wife, suitably attired in  evening dress and pearls).
Now, of course, Creepy Worlds and all the rest are pretty much unloved except by discerning fans and collectors. The corner shop that sold them is still there but pipe-smoking Mister Schalken and his daughter left years ago. The place is unrecognisable and sterile, plastic-franchise new; the old musty wooden and glass cabinets, stacked with snuff, tobacco, comics and pencils have been replaced with shiny white shelves and lottery tickets. I guess nostalgia ain’t what it used to be. Looking back, though, one thing I’ve never quite figured out was did the


original comic influence TV series like The Twilight Zone or was it the other way around? Or did they all just sort of take-off on their own separate weird and wonderful trajectories? Perhaps an uncanny case of pulp-cultural-cross-pollination – a bit like the birth of rock and roll and all those early independent records labels and radio stations.

Anyway, when I got into writing, a steely determination grew to figure out a way of celebrating Alan’s comics; to celebrate the thrill I got every time I opened the cabinet in Mister Schalken's shop and stepped into another world. And, I guess, a way to say thank you for inspiring me to write my own stories.
Funny thing is, even now, I still wonder if Jeff did manage to escape and return safely to his wife…

Posted by Jack Fielding at 03:29 No comments:

Posted by Jack Fielding at 14:44 No comments:

Meet the Hirschsprungs! How families ignored each other before Facebook and smart phones were invented:

Posted by Jack Fielding at 00:33 No comments:

If you love noir, you'll love this 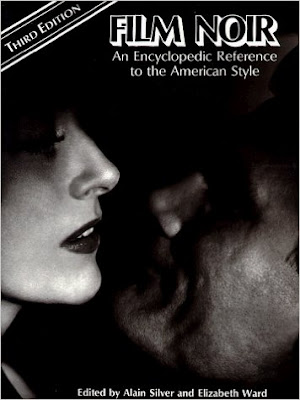 This is my favourite reference book on noir. Everything on all the films out there, from the classic to the obscure and overlooked. Plot, detailed analysis, cast and crew, and some fab quotes. The referencing lists at the end are particularly useful and inspired. Nice section on modern 'neo noir', too.

Highly recommended - the book and Bamboo!

Posted by Jack Fielding at 01:41 No comments: