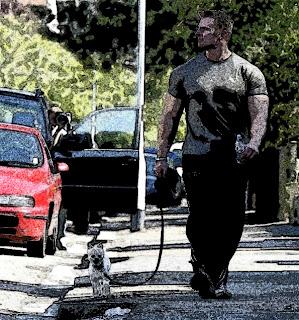 (Blimey, I’ve just realised: my last post was in 2011! Really, really sorry for the delay in getting this out. A severe case of “strategic interference.” Oh, I know my readers will understand. Anyway, here goes...)

District VIII is a working-class area on the Pest side of the river, characterised by cheerfully scabrous nineteenth century facades. Angry folk shout at each in bars at ten in the morning while others sleep it off in the parks and in doorways. There is an acrid smell of urine in the alley. Faded Arrow Cross postcards lay curled in the dirt. Tourists now realise with terrible clarity why their rooms in the Atlantic City were remarkably cheap in spite of the excellent buffet breakfast; they scurry down Nephansze utce towards McDonalds on the corner. They break out for the more respectable, user-friendly districts beyond. Meanwhile, massively-muscled guys wearing capped t-shirts, shorts, ankle socks and sandals, ignore the terrified tourists as they take their little dogs for a morning stroll. Why do such physically impressive guys walk around with the sort of mincing, watery-eyed toy dogs that Jayne Mansfield would have been proud of? Are they challenging stereotypes? Making a play on post-metro male normative behaviours? Diogenes, my midget philosopher mate who works for the Pest municipal council, has a much more prosaic explanation: they live in small apartments and can't keep big dogs. I'd like to think he's wrong.

There are three places of choice to visit in District VIII, all of which are on or within walking distance of the hotel. I’ll concentrate on the Drunken Tailor in this post because it’s just a few minutes walk from the hotel. You turn left out of the hotel, go up Nephnasze utce and it’s just up from the Tesco Express on the right.

Although owned by a gent of Middle Eastern extraction claiming decent from Queen Xenobia of Palmyra, the Tailor is actually run by an Italian called Morticia (not her real name). She is articulate, intelligent and can talk art, politics and the environment in fluent Italian, English, Finnish and Hungarian. Her father was a big player in the local wine scene. So she can always point you in the direction of a superb Hungarian red – generously filled glasses.

The Tailor is kitted out in a fresh, arty New-Age kind of way. There are beautifully composed photographs on the walls with less than subliminal messages about the environment. The music is more whales singing to each other in the South Atlantic than Elivs hitting the notes in Atlantic City but at least its unobtrusive. Morticia (still not her real name) has a tight circle of local friends who present as cosmopolitan in a self-consciously middle-class way. Many of these guys and women pop in to the Tailor over the course of an evening. They talk earnestly about organic root vegtables. Quite a few wear studs and have tribal tattoos in black on their shoulders and ankles. Some have had their soft regions pierced with chains, Rollo Snitt the barman whispers hoarsely to me. Soft regions? I whisper back. Rollo leans over the bar towards me. He raises an eyebrow as if to say, The people in District VIII are not quite what they seem.

The most impressive thing about the Drunken Tailor is not the green ambience, Morticia’s intense skills as host, those huge glasses of wine nor lure of chained labial decoration. It is the candelabras. Imagine that HP Lovecraft had been commissioned by the early 20th century Austro-Hungarian municipal authorities to design a set of candelabras. Purpose: to combine Cthulu mythology with tubular glassware and steam punk. That’s what you get in the Drunken Tailor: this New Age place with monstrously strange candelabras lights hanging – no, lurking –over the guests. Sitting there, you can just imagine a tentacle flicking out and down, scooping away an unsuspecting studded Hungarian environmentalist into the Forbidden Plane of Zog-tur. Gone in the blink of an eye. Not even time to get stuck into that organic plum pie straddled with curdled ewe’s milk. Thinking about it afterwards, I’m a bit annoyed with myself: I could have incorporated a story like that into Zen City. You know, when Mohawk gives Orson Palmer a set of Golden Age comics: one of the stories could have been called something like Earth versus Hungarian Candelabras. Image: fifties folk in the foreground running away, Washington DC in the background and a hovering candelabra in the middle, zapping death rays into an unsuspecting Ford Edsel.

WARNING#1 If you do go to the Drunken Tailor, do not, under any circumstances, mention the dreaded “Tirana” word to Morticia because she will become depressed. I mentioned it only once and she ended up in tears, disclosing too much information about some guy from a town on the Adriatic who was an expert in gaming software and live action fantasy role playing. It was a long night. I blame myself but, hey, I learned to be a good listener on the other side.

WARNING#2: Walk north from the Drunken Tailor past the Amigo Bar (more about this fine existential-fifties watering hole in the next post). There is a modern apartment to your right. It has a balcony. There’s a really leggy girl with skin as white as the undead who lives on the third floor. She sunbathes on the balcony and bears an uncanny resemblance to Rita Poposecu in Zen City. Rita wears a black-thong-bikini. Looks like shiny leather. The first time I clocked her, I was so engrossed I almost knocked over Diogenes who was trying to unlock one of his  dustbins. I suspect Rita sunbathes provocatively on purpose because I walked past her apartment the next afternoon (just to check) and there she was out on the balcony again – and this happened not twice but  five times.

WARNING#3: Don’t get vexed about getting aggravation in District VIII. Ignore reviews on websites like Tripadvisor. The fears of tourists and snootier locals who live nearby are largely unfounded. Morticia has been living and working there for over ten years and never once has been murdered, raped, robbed or ripped off. Actually, the only place I have been ripped off is on the main drag in Erzsebt where the tourists go; all I wanted was a glass of red to calm down after buying a hand puppet for my daughter and ended spending more than three quid on a cab sav that tasted like hamster pee.

I told Diogenes that if Sun's Junior Parker and the Blue Flames had been Hungarian and playing electrified Delta Blues in the 21st century maybe District VIII would have been just the place for them. Sounds like a long stretch, he said in that southern Buda drawl of his. But I will tell you where you can find stompin' cool Rockabilly riffs just north of here.
You're feeding me a line, right?
Nope.
Then lead on, my friend.
Diogenes climbed up onto the cab of his rusting Horthy Mk2 street cleaning machine, kicked the engine into life and orange lights, mounted either side of the engine cowling, revolved and flashed.The smell of diesel oil hit the air as Diogenes started chugging north up Nephnasze utce. I followed closely behind...
Posted by Jack Fielding at 12:40 No comments: