Is this the most INCREDIBLE offer ever?

The one everyone’s talking about from New York to 21 Long Tribble Lane, Accrington!
Yes, EXCLUSIVE replicas of Nobby Tirpitz’s famous mop handle that he threw from the Hindenburg as it exploded over Lakeside Naval Air Station in 1937. 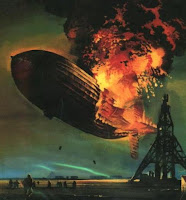 And that’s not all! Each replica comes with a FREE battery-operated toilet roll holder featuring an image of the airship with giant SWASTIKAS.

All this for ONLY $799.15. Includes FREE worldwide delivery.
Contact the author NOW to take advantage of this AMAZING offer!

Posted by Jack Fielding at 09:09 No comments: 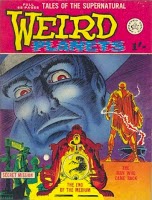 
“See, I got this comic book and it had your story in it. It’s called Oka Sundown. It’s all about this monk called Milo. He’s identical to you even down to the clothes and everything and how he meets this Zuikido Kid. They have this great adventure together.”


“The adventure – everything in the comic – happened in real-life to you and me! You walking past the alley that first time, giving me a cigarette, the fight and blowing away that yakuza, you getting nearly killed and the temple bell.”


That was an extract from Man in a Zen Ambulance with Milo the assasin-monk and the Kid. And here are more from the noir Zen City, Iso.

First, Orson Palmer on a train to Ayutthaya with Angel:


“Do you believe in anything – democracy, for example?”


I pull out my Valiant and hold it up to her. “You want to get stuck into proper reading material like this, The Man Who Fell Into Tomorrow. It’s very enlightening.”


But Angel picks up her paper again, gives it a sharp flick and starts reading.


And here’s Palmer again, this time at the Metropol Hotel talking to the desk clerk:

Little Wong leans over me. “And what’s that?”


“Look, you got others in there as well.”


I nudge him away then lean back in my chair. “Who did you say gave you this lot?”


“What did he say exactly?”


“He said give this to the big-nose-ugly-foreigner who wears those silly shirts and lives upstairs.”

I sit down and shove the bag under my chair.


“Tell me,” says Angel, “wearing a Hawaiian shirt with a sports jacket and – what on earth is that – ah, yes, a Krakos the Egyptian necktie. Is that what you call blending in?”


“More, I think, a reflection of my warm and colourful personality.”

There’s plenty more. All inspired by Alan Class and other Brit comics that go back as far as the 1940s. Some real, some imagined. Some with a post-modernist twist that feeds directly into the action. But all designed to breathe new life into Gail, Krakos and all the rest; entertain and, hey, maybe even provide a few laughs.  I hope my readers get a kick out of these comics and characters. I know I have.


Here are two excellent websites which were I made a lot of use of:


http://alanclasscomics.blogspot.co.uk/
Posted by Jack Fielding at 14:08 No comments: