I wander around the Black Church asking where the rock and roll bar is. You know, Mystery Train on Sun? But I come up empty. I’ve got a sneaking feeling I’ve been tricked into going to Romania by the twin with the unpronounceable name.

I stand outside the doors of Kronstadt’s famous Black Church and frown.  A 6 lei entrance fee? Any kind of fee. No, thanks. The synagogue is, I think, five. There is an elderly, bored guy waiting impatiently to grab newly purchased tickets.

Does God charge for his services now? Or has He been forced to compete with the t-shirts, dolls, magnetic pictures and faux traditional dresses on sale in Kronstadt’s baroque streets? Or has He been forced to seek help with the maintenance – like a city bus stop? In sum: reduced to either a tourist attraction or poor municipal cousin. I wonder what Luther would have made of it all? Actually, perhaps he would have found the whole commercial mummery quite familiar – he was, after all, sufficiently moved to nail those theses of his to the door.

So I head for St Peter and Pavel’s, the Roman-Catholic Church just down the road. The doors there are always open it seems and without the demand for wedge. I go in. Quietly sit down. Trying to be discreet because there’s is a baptism in progress. All the family are there; formally dressed: a little lad in a white suit, including a matching waistcoat. Many of the family are holding large candles, forming a circle. I can’t see the baby but occasional crying disturbs the hushed sepulchre-baroque splendour. Pink marble pillars. My grandmother used to love ritual like this. Careful not to make any noise and feeling a little self-conscious – one of the family has noticed the stranger sitting at the back of the pews – I take my leave. I walk out into the hot glare of the late morning.

I pop in to the Greek Orthodox Cathedral on the main square. Oddly enough, it reminds me of the Happy Heart Temple in Nong Khai on the Thai/Lao border. Although the church doesn’t have any grandfather clocks or tiger-skin thrones it does have a different, possibly even gaudier, dazzling richness. Also, like a Thai temple, there aren’t any pews. You have to kneel on the cold, hard marble floor. Discomfort as focus.

I head back to my apartment next to Sex Shop.
Posted by Jack Fielding at 02:48 No comments: 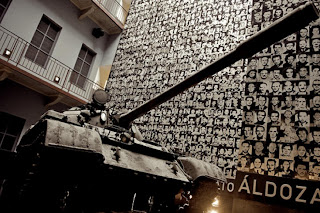 I watch Diogenes pause before pushing his bowl of fermented cucumber soup to one side. Something important about a place only fifteen minutes walk from the Atlantic City.  Might do you good, Jack. OK. So I grab my trilby from the table, leave some shrapnel for the bill, shake Diogenes’ hand and make my way to Hársfa utca. Maybe he knows I don’t like the soup.

Squeezed uneasily between two faded Baroque buildings, the Anxious Bar isn’t difficult to find. At first I think I'm seeing double. But no it is actually two guys standing behind the small bar with identically manicured blonde quiffs, the same build and green eyes. Their respective wives also bear a striking resemblance to each other. Do twins marry twins? Is that healthy, legal even? Miklos and his brother, with an unpronounceable name, own as a well as run the Anxious. To the back are wooden booths for dim-lit assignations. Downstairs a cellar where live sounds strike out outside of the August holidays. The walls are adorned with record labels, Edsel ads and Elvis mirrors. There is a gigantic poster of home-grown Hungeria, a band that deliver safe retro numbers and look like they have two hundred people in it. Very Eurovision. Not hardcore like the photos above the stairs of Crazy Cavan and the Rhythm Rockers or the late Sunglasses Ron Staples.

I cut the breeze with the regulars. These included an old timer called Leslie who plies me with some kind of fruit-flavoured schnapps. He talks passionately at me for a full twenty-five minutes about the Soviet tank in ’56 that ran over his disabled cousin. Or does he mean his cousin was disabled by the tank? Anyway, by the end of the monologue I feel like I’d been there. Do I like the Russians? Never had a problem with them in Moscow. Can drink a lot. No, no. Another schnapps? Let me buy you one. You’re a very kind man. Yes. Cheers. And then there is Chewbacca who’s just returned from temporary work in Hastings where he’s been translating computer games for various eastern European countries. Why Chewbacca? You know, my beard – long hair – my height – Star Wars. Oh, I see.

A male, alcohol-fuelled late night argument develops: the twin with an unpronounceable name tells me the Stray Cats invented British rockabilly music. I get drawn into this silly, redundant nonsense. Now there are more important things in the world. Rising sea levels. Syria. But music is, after all, life. Death. Like art. No, really, it is. Ask Tracy Emin or, much better, Paul Klee. So I get stuck in. Fire back about how real British rockabilly was invented by the likes of Crazy Cavan and the Rhythm Rockers in Wales. Home-grown, hardcore. Nothing to do with imported, manufactured crappola from New York, pal. The twin goes out back. Next thing there’s this weird gothic pyschobilly dirge pumping out. Just for me, I guess.

Finally we agree that rockabilly did at least originate from the South. The States, not south Wales. Chewbacca helps me get back on my stool and says, quietly, that he was sure I was right about the Stray Cats being complete c***s. Well, I didn’t exactly say that. Chewbacca asks me if I’m really OK. Cucumber soup can do strange things to a man, I reply. Take Elvis, for example. He died on the toilet.

Miklos puts on his collection of Sun tracks. Everyone loves Sun. The brother with an unpronounceable name and I get talking Johnny Cash –now there was a man who got religion – and then he tells about a bar in downtown Kronstadt. In...in where? Transylvania? I suspect he’s pulling my chain but no, it’s just down from the Black Church near Strada Republicii. Easy: follow the sound of Ring of Fire on vinyl. He’d been there and they played stuff I’d like for sure. Couldn’t remember the name. Didn’t have a website but the music was hot, authentic. No Stray Cats, Jack. Yeah, OK. Sorry.

Leslie places another schnapps in front of me. I ask him where Transylvania is. I only hope the Soviets haven’t got there first.

Footnote: The Anxious Bar encounter inspired the surreal rescue by train of the monk in Man in a Zen Ambulance.

Footnote: as I’m writing this post I notice a kid on crutches across the street, trying to get my attention. He appears to be standing next to...what is that? You know, I think it's a washing machine.
Posted by Jack Fielding at 03:26 No comments: