An old hunting ground of mine featured in Shadows and Pagodas is back in the news. In the novel it's called the Pagoda of Earthly Delights (thank you, Hieronymous B) but in real life is actually Khao Phra Vihear, a Khmer temple complex nestling above a precipice on the Thai-Cambodian border. Hotly disputed between the two countries, wonderful views and ghostly whispers amongst the colonnades have been replaced by the thud-thud of mortar shells and exchanges of semi-automatic fire. Strictly off limits.
But it seems the UN has finally ruled on who owns the disputed temple and the land around it - Cambodia.

"Darkened relations"  have been threatened.

So are the knives of fervent nationalist being sharpened or will convoys of air-conditioned tourist buses now drown out the whispers...?

http://www.thephuketnews.com/updated-both-sides-claim-win-in-khao-phra-viharn-border-dispute-42793.php
Posted by Jack Fielding at 04:01 No comments:

Off the rails in Paraguay


I put my ticket in my jacket pocket then hop onboard the General Lopez. Named in honour of Paraguay’s national hero, the wood burning locomotive hisses and steams; it gives the impression of an angry, restless iron beast that has just escaped from a spaghetti western. The station in Asuncion was built by British engineers and reminds me of London Marylebone. With its wonderful Grade 1 listed iron and glass roof and warm stone colours, the London station is one of my favourite buildings. Mind you, there is one important difference between the two stations: in Asuncion there's a posse of fierce, overweight ladies in heavy makeup lurking around the corner from the entrance.


Many years later I will draw on my impressions to pen a scene in Zen City, Iso in which Madam Sin puts the luckless Margie on a steam train to escape Bangkok.

I walk along the aisle of the deserted carriage – there are no tourists here in August 1990 – and plonk myself down on the wooden seat next to the window. It is hot but bright and airy. The smoke from the General’s raging wood begins to tickle my nose. I pull out a paper bag from my pocket and pop an Everton mint into my mouth. I check my watch. In a few minutes the train should be leaving for Aragua. According to my handbook, this quaint colonial city with its cobbled streets, mansions, flower gardens, beautiful women and plazas is thirty clicks up the line and nestles on a picturesque lake called Ypacari, which means Waters of the Sacred Newt in the Guarani Indian language. But, of course, I am not going to Aragua for any of that – I am going there to meet my new friend Harry, the ex-armed robber from South Africa.


Suddenly there is a loud, shrill whistle. Next thing, I’m thrown forward as the General lurches into action and my Everton mint flies out the window...

http://lifestyle.in.msn.com/travel/paraguays-steam-locomotives-a-magnet-for-tourists-1
Posted by Jack Fielding at 03:08 No comments: 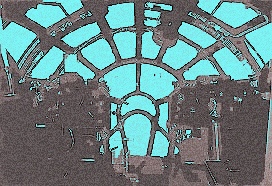 
Sorry but the plastic dinosaur – sorry, Thai water dragon – belonging to Diogenes the Hungarian dwarf really does remind me of the time when I used to play Dungeons and Dragons. Back then proto ‘shoot ’em up’ computer game designers were cutting their creative teeth on an amazing social concept: friends sat around a table (sometimes with Citadel metal miniatures) and role played Tolkien-inspired adventures in dungeon settings. A world of 20-sided dice, wandering monster tables, Kobolds and frighteningly tight chainmail underwear. In these crazed subterranean adventures one of the magical items your Fighter-High Elf-Lawful Good-Whatever You So Desired-character could acquire was a Bag of Holding. This seemingly innocuous leather bag was actually some sort of trans-dimensional device like Doctor Who’s Tardis, which meant it could actually hold much more than its outward physical dimensions suggested. Diogenes’ dinosaur is a bit like that like that – on the outside merely a medium-sized plastic drgon but after unzipping its belly he pulls out one blessed thing after another. In fact, he keeps going until the table is almost groaning under the Himalayan weight of it all.


“Blimey,” I say. “Is this the special delivery from Thailand then – the stuff that was saved from that terrible flood?”


Diogenes takes a tatty old sepia exercise book from the pile, suspiciously holding the spine between his thumb and forefinger.


“You better bloody not!” I quickly take the book from him. “And be careful. All that you see before you – the exercise books, badges, squeezed tubes, caskets, VHS tapes, scraps of papers, postcards, box lids, paper bags, torn envelopes and that weird statuette with the bulging penis – all represent the detritus of a lifetime of pratting about in the sometimes dangerously improbable areas of the worlds’ dark and wrinkled soft bits. So treat with care, my hairy vertically challenged friend.”


“You’re lucky I didn’t come across this lot cleaning the Budapest streets otherwise it would have gone straight into my dustcart where it belongs.”


I gently take a train ticket issued in Asuncion and hold it up. “You know what this is?”


“A train ticket issued in Paraguay?”


“No,” I say, patiently. “It is not just a Paraguayan train ticket. It is…it is…like a Ring of Teleportation…but disguised as…as a, err, ticket.”


“Jack, how much have you had to drink?”


Diogenes sits back in his chair and orders two glasses of full-bodied local wine. Alright,” he says. “I give up. You tell me the story behind a crappy old train ticket that is actually not a disguised magical item.”


“Deal is the same as always: I get the drinks in and you supply the dubious stories.”

I've based myself in the Snail Cafe in Racozci Square. Always sitting at the same table under a weirdly skewed painting that bears a remarkable resemblance to Otto Dix's 1920 Skat Players. I'm waiting for Diogenes to return from a one-week trip to Lake Balaton so I can finally get my hands on that mysterious delivery from Thailand.

Fuelled by copious amounts of cold beer and rich goulash, I've kept myself busy creating two new blogs. One is devoted to Shadows and all things 'meddlesome' and the other to my one hand clapping novels, including Zen Ambulance (now going through another draft and almost ready). The two blogs will hopefully give my readers an interesting insight into the many things I've put into my books. Everything from poems, sources, memorable quotes, references to films and TV, music and where to find the real-life locations behind the places that appear in the stories.

Suddenly I get a tap on the elbow. I turn around. My friend Diogenes is standing there in his bright orange overalls. Naturally he's carrying a very large plastic dinosaur with a zip running the length of its stomach.
"You're back," I say.
"Yeah, just in," he replies. "Any chance of a beer?"
I order one in for him.
"At the risk of sounding dense, why are you carrying a giant plastic dinosaur?" I ask him.
"Actually, it's not a dinosaur but a Thai water dragon - I can't even begin to pronounce it in Latin so don't ask. Her name is Claudette."
Claudette?
"OK but why on earth have you brought her here?"
But the beer arrives, Diogenes sits down with the dragon on his lap and gets stuck in. I have to wait for an answer. Finally, he wipes the froth from his beard. Then he looks around the cafe and, satisfied no one else is watching, picks up Claudette and unfastens her zip. He puts his hand gently inside her stomach.
"I've got the key to your special delivery from Thailand," he whispers.

Posted by Jack Fielding at 04:44 No comments:

I open my eyes. Morning sunlight is streaming into the carriage, empty apart from me. There is a faint smell of cigarette smoke mixed in with freshly cut oranges. Looking out of the window I can see Keleti Station in the distance. It's rapidly getting bigger. In a few minutes I’ll be arriving in Budapest.


I had a strange dream sometime in the early hours. Imagine this large sphere made of glass or plastic spinning around in outer space; it’s all sort of glittery and sparkly like one of those Christmas toys you shake to prompt a fake snowstorm. Inside the sphere I can see my family: there’s my wife and I sitting on a sofa and at our feet our little daughter and son are playing on the floor together. We are completely absorbed in watching our children play. It’s as if we’re stuck or captured in a single moment. I watch them – us – with intense fascination. But, despite my best efforts, the sphere gradually spins away into the darkness and out of sight towards an unknown destination. Somewhere in time.


With a sigh I grab my trilby and get ready to leave the train. I need to meet Demetrius and finally find out what that mysterious delivery is from Thailand.
Posted by Jack Fielding at 02:51 No comments: