A painting has turned up at the Art Bistro. It appeared as if by magic last night above the bar. No one knows how it got there. In the painting is a little girl in a black cowl sitting on the back of a two-headed red dragon. The dragon has opened one eye and looking straight at me. The girl’s eyes are cast down at the dragon. They appear to be in a cave but, on closer inspection, it is the silhouette of Kronstadt forming a circle around them. Maybe the mouth of a cave, maybe not. Is the dragon guarding the girl? The girl is the mistress of the dragon? Guarding the city? Not a single person in the Art Bistro knows what the painting signifies but everyone likes it.

There is something archetypal about the painting. At first the tones and style of the painting remind me of the work of Hieronymus Bosch: the dragon could come from the Garden of Earthly Delights. But then I’m not so sure. It’s too gentle, connecting. Then I look at the girl again. Now I get it: the creatures and people in Studio Ghibli’s Spirited Away.  Western and Eastern archetypal connections.

The next day I return to the Art Bistro but the painting has gone.

Footnote: Shadows and Pagodas is full of medieval and Buddhist symbolism e.g. the dead pelican with the perfectly formed apples, the three temples with their steep causeways going up to heaven and, of course, there’s Peter’s very own mysterious painting.
Posted by Jack Fielding at 02:57 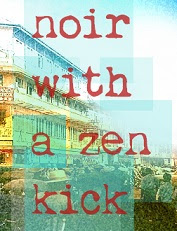